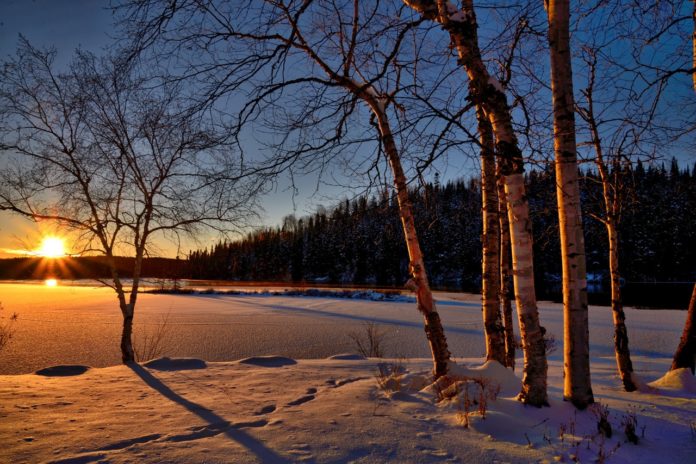 The winter solstice occurs in December and in the Northern Hemisphere the date marks the 24-hour period with the fewest daylight hours of the year, which is why it is known as the shortest day and longest night. Some may bemoan the shortage of sun, but why not make the most of the hours of darkness by stargazing? This year, the Moon will be in its waning crescent phase so unless it’s cloudy, it should be a good opportunity.

As a result of the north of Earth leaning away from the Sun, December 21st sees the fewest hours of sunlight in one day. The shortest day lasts for 7 hours 49 minutes and 41 seconds (in London, UK.) This day is 8 hours, 49 minutes shorter than the June Solstice.

What is the Winter Solstice?

The winter solstice happens every year when the Sun reaches its most southerly declination of -23.5 degrees. In other words, when the North Pole is tilted furthest – 23.5 degrees – away from the Sun, delivering the fewest hours of sunlight of the year.

The Sun is directly overhead of the Tropic of Capricorn in the Southern Hemisphere during the December solstice and is closer to the horizon than at any other time in the year, meaning shorter days and longer nights.

The day after the winter solstice marks the beginning of lengthening days, leading up to the summer solstice in June.

It’s always on the 21st December then?

While it more often than not falls on December 21st, the exact time of the solstice varies each year.

In the Northern hemisphere the winter solstice is the shortest day of the year, because it is tilted away from the sun, and receives the least amount of sunlight on that day.

However, the earliest sunset does not occur on the solstice, because of the slight discrepancy between ‘solar time’ and the clocks we use.

The shortest day of the year often falls on December 21st, but the modern calendar of 365 days a year – with an extra day every four years – does not correspond exactly to the solar year of 365.2422 days.