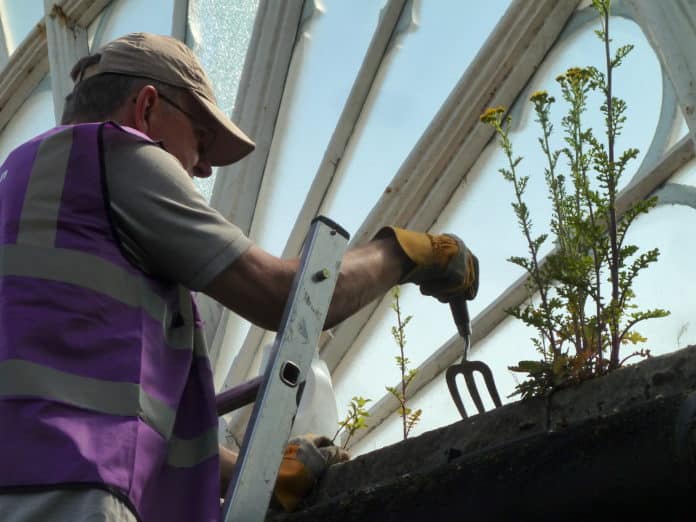 Local voluntary community group, Friends of Buxton Station (FoBS) have been honoured with The Queen’s Award for Voluntary Service, the highest award volunteers can receive in the UK and viewed by some as the MBE for volunteers.

Best known locally for their work to make the town’s railway station more welcoming and comfortable, the group have also been active in the wider community, particularly during the year of lockdown when they hosted a large part of the alternative wells dressing festival and put together a Rail Retail Trail leaflet to help local independent businesses recover from the effects of COVID-19 shut-down. 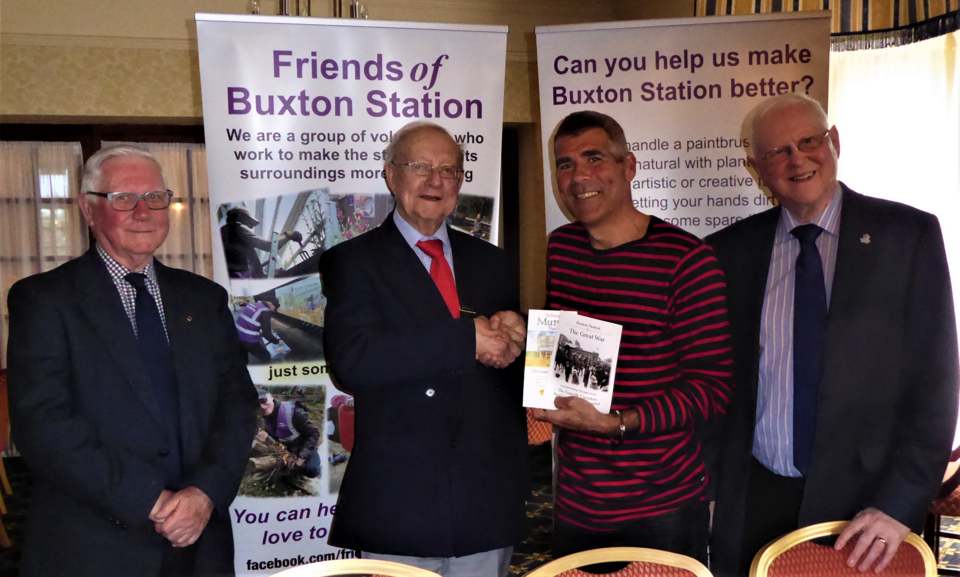 FoBS is one of 241 charities, social enterprises and voluntary groups to receive the prestigious award this year. The number of nominations remains high year on year, showing that the voluntary sector is thriving and full of innovative ideas to make life better for those around them.

Created in 2002 to celebrate The Queen’s Golden Jubilee, The Queen’s Award for Voluntary Service recognises outstanding work by volunteer groups to benefit their local communities. Recipients are announced each year on 2nd June, the anniversary of The Queen’s Coronation.

FoBS representatives will be presented with the QAVS award crystal and certificate from Mrs. Elizabeth Fothergill, CBE, the first female Lord-Lieutenant of Derbyshire, later this summer.

All winners of The Queen’s Award for Voluntary Service will be invited to attend a garden party at Buckingham Palace in May 2022.

Dave Carlisle, FoBS Chairman says: “We’re absolutely delighted that our community work has been acknowledged at such a high level.  This Award pays a fitting and glorious tribute to the hard work and commitment of all our volunteers and those who work with us.  It’s a right Royal pat on the back!” 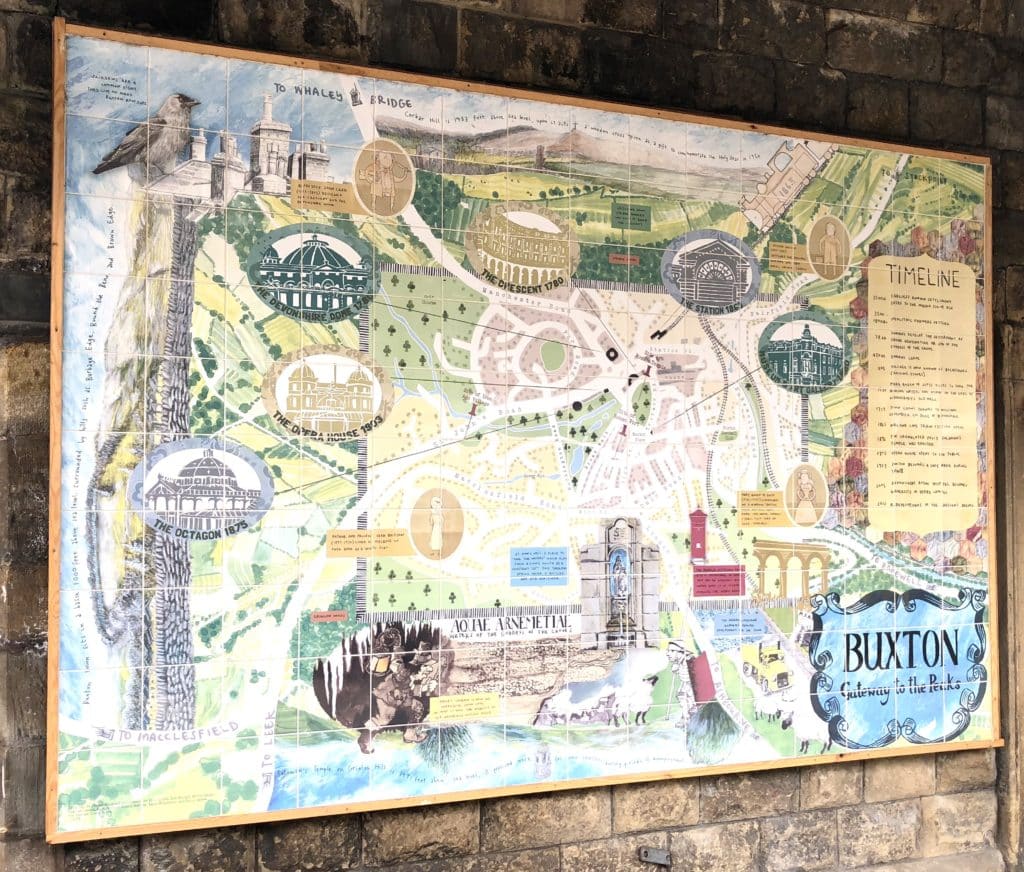 Some of those who have worked with the volunteers were quick to add their congratulations:

Louise Potter, Derbyshire’s first High Sheriff to come from Buxton paid tribute to the volunteers, saying: “As the Queen’s local representative, it gives me great pleasure to see her special Award go to such dedicated volunteers – they do so much, not only for the station and its surroundings, but also for the town as a whole.  I have followed their progress and appreciate the efforts they make on behalf of Buxton people.”

And High Peak MP, Robert Largan added: “Many congratulations!  I’ve met the Friends several times and always been impressed by their commitment to see things through.  We are currently working together with the owners of the land next to the station and the Council to persuade them to do something positive for the town.”

Becky Styles, Community & Sustainability Manager at Northern Trains Limited said: “So well deserved.  We have worked with the Buxton Friends many times and found their innovative approach refreshing.  It’s a joy to see what will get up to next!”

Who are Friends of Buxton Station

Formed in 2009, the group was more of a rail user group to begin with, campaigning for improving rail services, before turning their attention to the run down station building and the dilapidated fanlight window, thought to be in danger of collapse at the time.

Fun was had when the group set up the first Santa Trains to bring lots of excited children into town.  Regular audits by the then Station Adopter, Roland Ennos made sure that improvements were gradually introduced by train operator, Northern Rail. 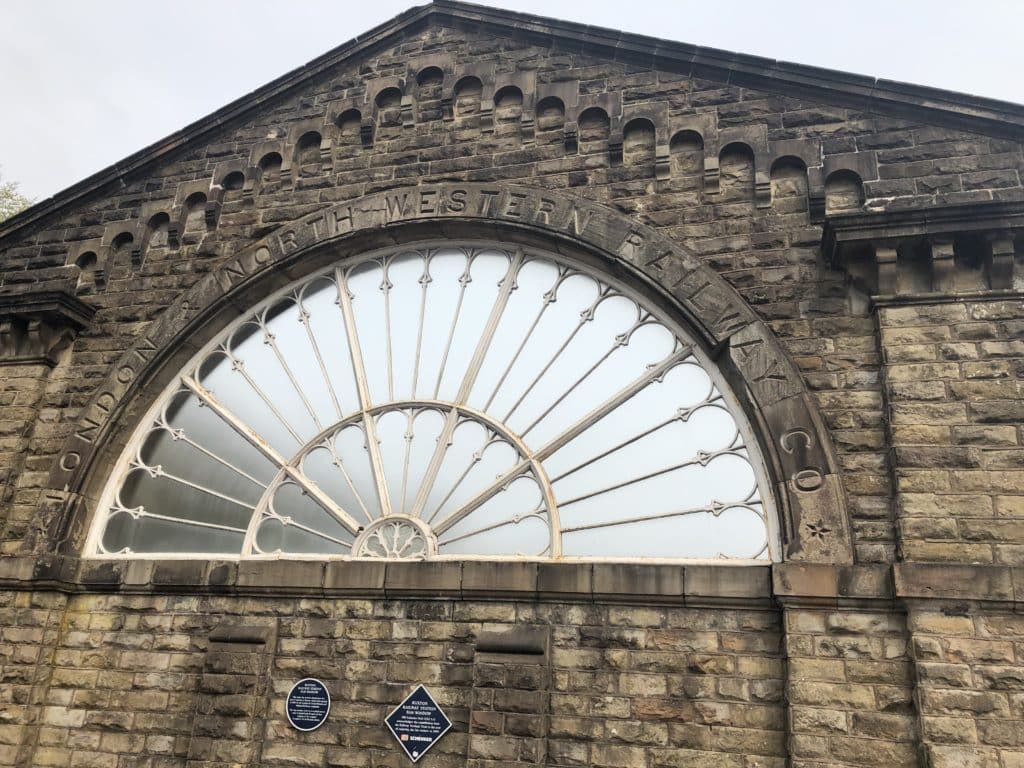 Friends of Buxton Station group took on a new direction in 2015 and actively sought to focus on the station environment and how they could improve users’ experience – as well of course enhancing the image of Buxton when visitors stepped off the train. Dave Carlisle, said, “our primary aim for the group was and still is to make the station more welcoming and comfortable, making it a proud gateway to our lovely town.”

But it didn’t stop there and since 2015 it’s become much more than simply improving station surroundings and making them look better. Art and creativity is a key element which has breathed colour back into the station; a Japanese Garden, art work and murals displayed in the ticket office and along the platforms have helped to transform the environment here. 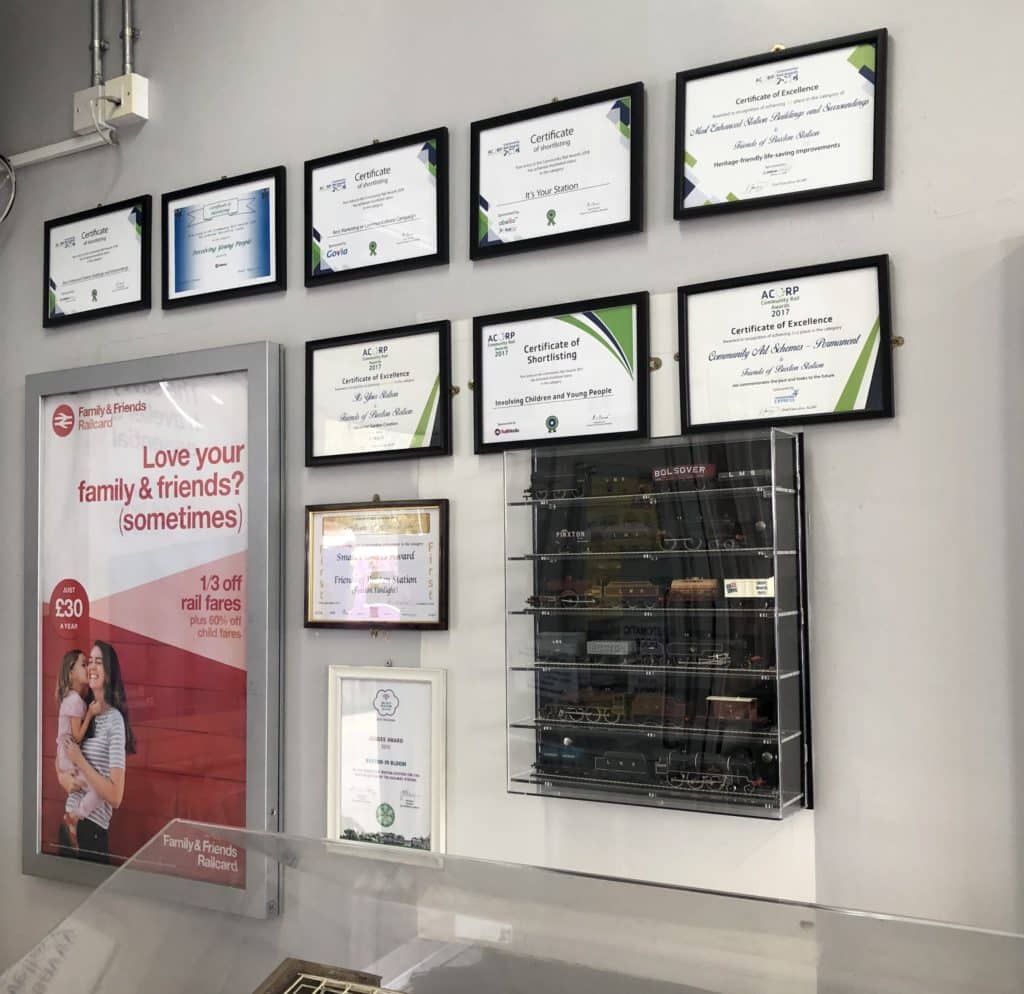 Aside from enhancing the station visually, the group was keen to improve comfort for passengers. Interspersed with practical jobs like litter picking and repainting, they soon spruced up the station platforms with oak barrels filled to the brim with plants and large planter units made from old railway sleepers that were full of colourful shrubs.

Local wildlife have benefitted from the Friends’ help too after they managed the parcel of land on Palace Road, undertaking re-wilding work by stacking up cut and fallen branches to rot down and provide food and housing to insects as well as chopping up vegetation for nesting.  They’ve even put up bird nesting and bat roosting boxes! 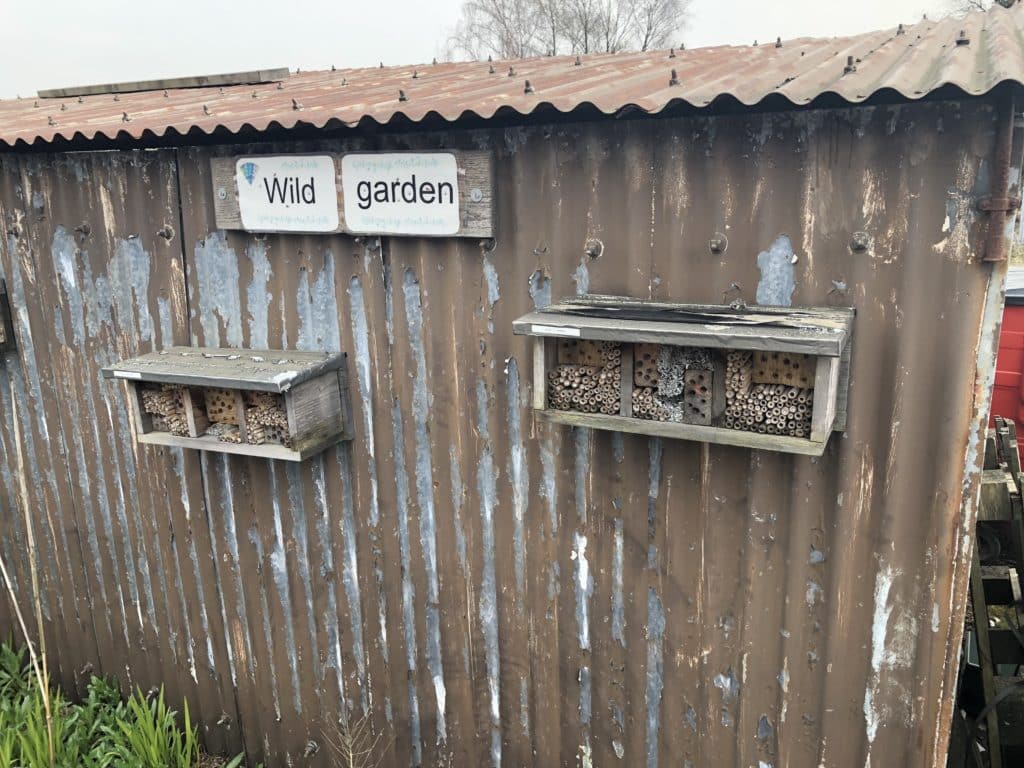 Over this last year, FoBS have concentrated on their community based project work, involving local organisations not often associated with rail travel.

Always willing to work away from the station boundaries, the group completed a collaborative project with Buxton Lions to restore a dozen vandalised memorial bench seats. 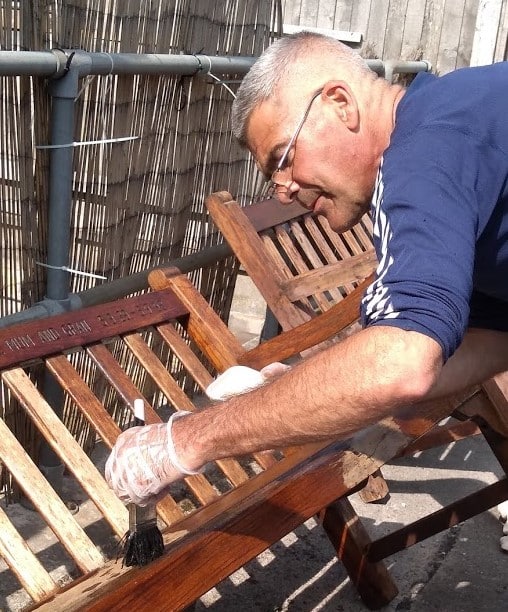 Most recently, the friends have highlighted the threat facing the Bilberry bumblebee, a rare and endangered High Peak resident; found only in mountainous areas of the UK, it is threatened with extinction.  The group have created a huge planter unit, worked with local school pupils to plant wildflower seeds and set about an information project to get locals to plant more bee-friendly flowers. 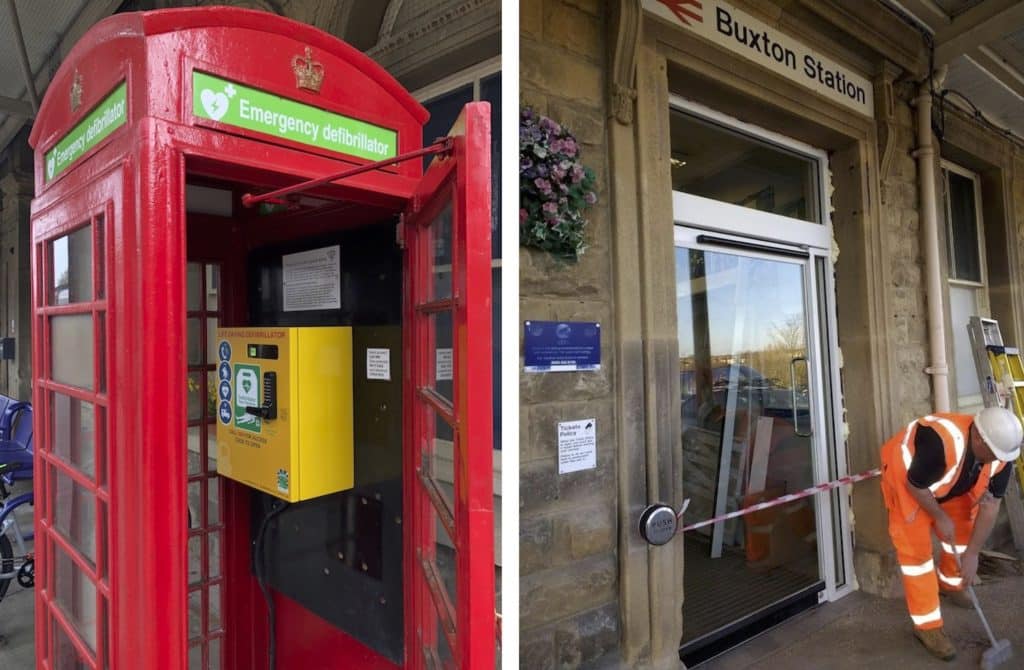 Other projects include over the last five years include: